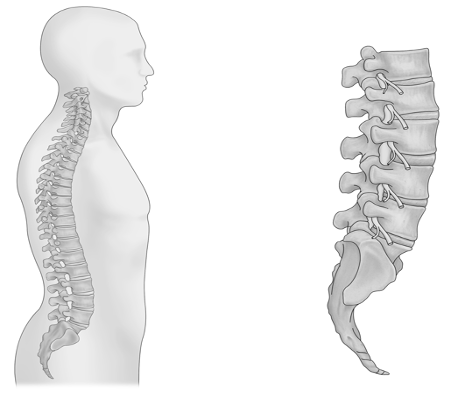 Let's look at some basic anatomy you should know if you suffer from low back pain. Then I will explain the different causes of low back pain and what you can do about it. The muscles I include in this chapter tend to have trigger points that can cause low back pain. Trigger points are focal muscle spasms that inhibit blood flow and lymphatic drainage as well as put pressure on nerves.  This can cause localized pain or referred pain to another area of the body.

To be clear, the low back starts at the bottom of the back of the ribcage and ends at the top of the buttocks. Pain in the low back can be caused by tissues outside of this region.

Trapezius, aka the Traps 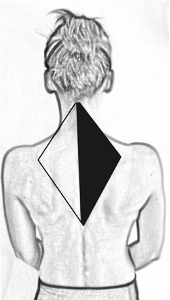 The trapezius muscle run from the top of the neck, over to the shoulders, and down to the top of the low back. When viewed together, they are kite shaped, as shown in Figure 2-2. The upper half of the trapezius is the muscle that is alluded to in the phrase, “Holding the weight of the world on your shoulders.”

When a muscle is in a constant state of contraction, the flow of blood into the muscle and the drainage of waste out of the muscle slow. Over time, waste builds up, leading to pain in the trigger points. Trigger points in the trapezius muscle can cause upper to mid-back pain directly or send pain shooting into the low back region. 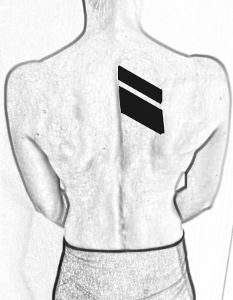 The rhomboid muscles are mostly responsible for good posture by holding the shoulder blades in toward each other (Figure 2-3). These muscles are usually underdeveloped and weak in most people because most people slouch to some degree. Slouching rolls the shoulders forward, spreading the shoulder blades apart and over-stretching the rhomboids. This constant overstretch and underutilization weakens them, making it even harder to hold a good posture.

If people recognize they have weak rhomboids and are trying to strengthen them, they generally use their trapezius muscle during the rhomboid exercise, making their problem even worse (the traps are generally overdeveloped and need to be stretched more than exercised).

Latissimus Dorsi, aka the Lats 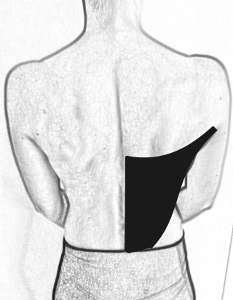 The powerful latissimus dorsi muscle anchors to the low back and inserts into the upper arm (Figure 2-4). When it contracts, it pulls the arm back and toward the torso. It also causes the arm to roll inward (internal rotation) when it contracts because it is attached slightly in front of the bone. The lats also work with other muscles to move the low back in lateral flexion (tilting to the side of the muscle) and bending backward (extension). 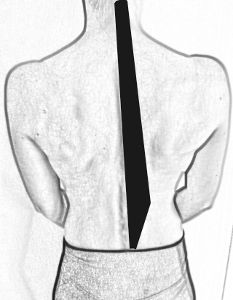 As the name suggests, the erector spinae muscles straighten the spine, or make it erect . These muscles, which run alongside the spine, also help rotate the spine.

Slouching bends the spine forward and causes these muscles to become over-elongated as they strain to hold the body upright. This turns them into tight ropes with painful “knots.” Pain can occur from the low back all the way up to the neck. These are very deep muscles, making the knots difficult to manually release with a regular massage. A good deep tissue massage (especially with the assistance of massage tools), specific stretching and chiropractic manipulation can help wring out the tension caused by constant poor posture.

Gluteal Muscles, aka the Glutes 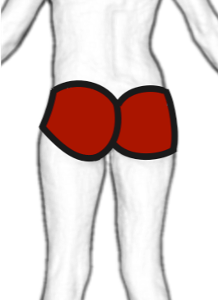 Large muscles in the buttocks—the gluteus maximus, gluteus medius, and gluteus minimus—are often lumped together as the “glutes” (Figure 2-6). They are involved with moving the thighs mostly in extension, but also in rotation (internal and external) and abduction.

Smaller muscles under the glutes work with the glutes. These deeper muscles can affect the sciatic nerve, causing sciatica (pain that runs down one or both legs), as well as the pudendal nerve, which supplies the genitalia, causing pain, numbness, tingling, or itching in this region.

If the glutes or the underlying muscles are too tight, they pull on the pelvic bones (their anchor), affecting the tilt of the pelvis, which can add pressure to the lumbar discs in the spine, making them vulnerable to injury. Tight muscles in the gluteal region are often a big part of low back pain. 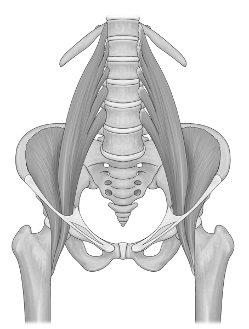 The iliopsoas muscles anchor onto the lumbar spine and inside the pelvic bones and insert inside of the hip (Figure 2-7). These are our powerful hip flexors; they are the major muscle involved with lifting our legs to make us move forward.

These muscles are often shortened and tight in people who sit too much. After being in a shortened and compressed state for minutes, if not hours, of sitting, they strain the low back when you first get up as they are pulled into an elongated state.

Most people with low back pain need their hip flexors released with stretching and massage. These are deep muscles and difficult to get to without a knowing hand. You will know if the practitioner is working on the hip flexors because these muscles are usually very painful; they are reached by pressing through the groin.

Every time you sit for too long, tension in these muscles blocks their lymphatic drainage as well as the drainage of the lower extremities. The buildup of lymphatic fluid (which is full of metabolic waste like lactic acid) can lead to back, hip, leg, and foot pain.

Abdominal Muscles, aka the Abs

Weak abdominal muscles are often the main cause of low back pain. Sadly, many people know this, but when they try to do something about it, they end up strengthening their hip flexors instead of their core muscles. This is easily done because when people have weak abs, they tend to have strong hip flexors that compensate for the weak core. This is why it is important to have a professional personally show you how to isolate your weak muscles while relaxing your strong muscles.

Biceps Femoris, Semitendinosus, and Semimembranosus Muscles, aka the Hamstrings 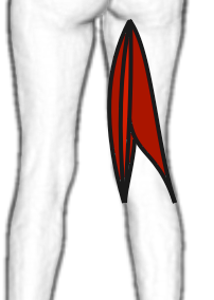 The hamstrings are the large muscles in the back of the thighs that anchor on the sits bones (the ischial tuberosities of the pelvis). Because they are in the back of the leg  and cross both the hip and knee, they are involved with bringing back (extending) the hip and bending (flexing) the knee. Because they anchor on the pelvis, they can affect the pelvic tilt, which can add pressure to the lumbar discs, making them vulnerable to injury.

Most people tend to have tight hamstrings because they sit with their knees bent, allowing the hamstrings to tighten over time. Eventually the hamstrings get so tight that when a person first stands up, their tight hamstrings pull on the sits bones, pulling down on the back of the pelvis, causing it to tuck in when it needs to roll back. These opposing forces compress the low back, which can lead to injury.

People with tight hamstrings usually have tight hip flexors, and vice versa. When both of these muscle groups are tight, your low back is vulnerable (if it’s not in pain already).

These muscles anchor on the pelvis and can affect the pelvic tilt, which can add pressure to the lumbar discs, making them vulnerable to injury. 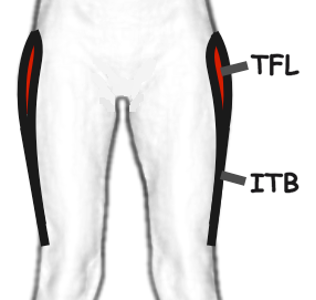 The large muscles in the lateral (outside) thighs (Figure 2-11) are involved with moving the thigh in abduction (raising the leg outward, away from the other leg).

If they are too tight, they pull on the pelvic bones (their anchor), affecting the tilt of the pelvis, which can add pressure to the lumbar discs, making them vulnerable to injury.

Tight TFL muscles can be a cause of low back pain.

Adductor Magnus Muscles, aka the Adductors 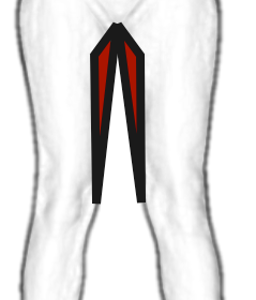 The large muscles in the medial (inside) thighs (Figure 2-12) are involved with moving the thigh in adduction (squeezing the legs together). If these muscles are too weak, they are not able to stabilize the pelvic bones (their anchor), affecting the tilt of the pelvis, which can add pressure to the lumbar discs, making them vulnerable to injury. Tight adductor muscles can also a cause of low back pain.

Most people need to work on strengthening these muscles.

Many more muscles affect low back health (piriformis muscles, multifidus muscles, quadratus lumborum muscles, pectineus muscle, gracilis muscle, etc.), but if you know the major ones pictured in Figures 2-1 to 2-11, we can talk about stretches and exercises that can help with your low back pain.

If after working on these muscles you still suffer from low back pain, ask your practitioner to look at your pelvic floor muscles (Figure Below). 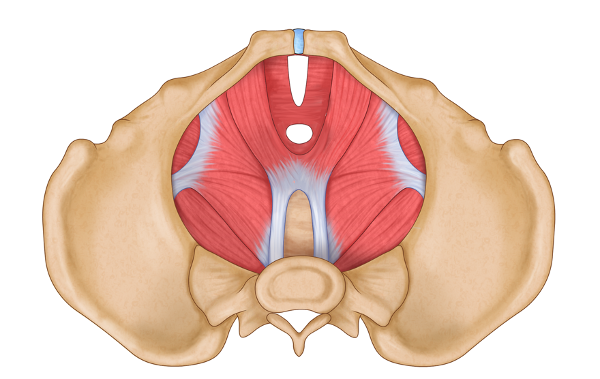 These muscles hold up your organs and control your bowel and bladder releases. Some people are surprised to discover that these muscles also play a major role in low back health and more, as explained in Chapter 24 in our Combat Low Back Pain book.

Lymph Can Affect Low Back Pain

As mentioned in Chapter 1, pressure on the veins (be it from spastic muscles or from the pressure of sitting too much) can cause blood in the veins to back up and the surrounding muscle tissue to swell, which may result in pain in the low back, as in pelvic congestion syndrome. Figure 2-13 shows a healthy vein where blood is flowing properly and the muscle is normal, versus a vein where the blood is blocked and the surrounding muscle is swollen. 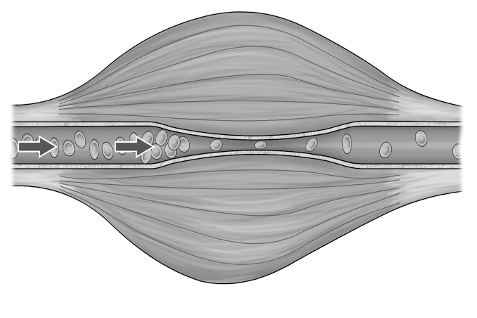 The same holds true for the vessels of the lymphatic system (Figure below). 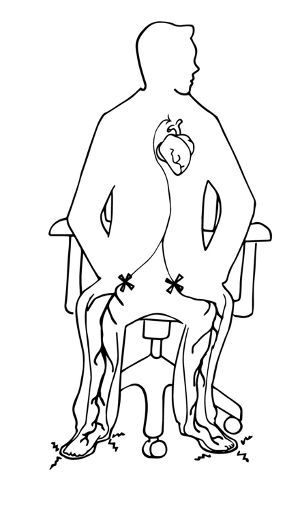 The lymphatic system is the sewage system of the body’s tissues. Every cell produces metabolic waste like lactic acid.  Most of the waste is taken away by the veins, but the excess drainage is handled by the lymphatic vessels. The drainage of the lymphatic vessels is powered by the pumping action of muscles contracting and relaxing, which pushes the fluid through these one-way valved vessels.

When you sit for long periods, you squish these vessels instead of making them pump. This leads to a backup of metabolic waste, making your tissues swell with acid-filled fluid.

I believe this is why many people are tender to touch; as pressure squishes the toxic fluid through, the tissues downstream become irritated.

Massage helps milk out this toxic waste, but again, it hurts because you are literally milking acid though your tissues to get it out.

How to Be Well

If you strengthen what is weak, massage what is spastic to milk out what is toxic, stretch what is stiff (with chiropractic adjustments, yoga, physical therapy, etc.), eat well, and sleep well, not only will your aches and pains likely fully resolve over time, but you will feel and be well! 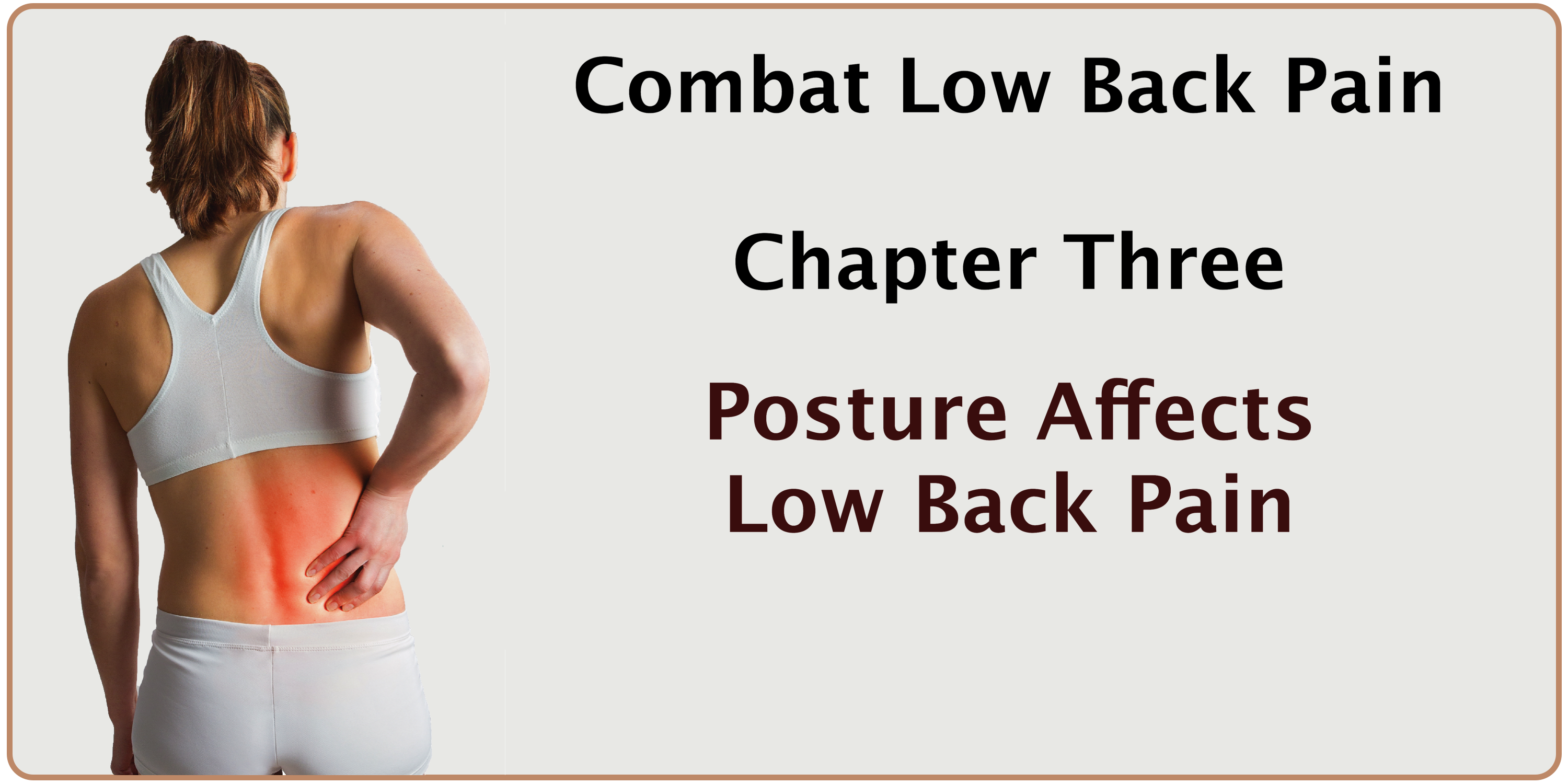 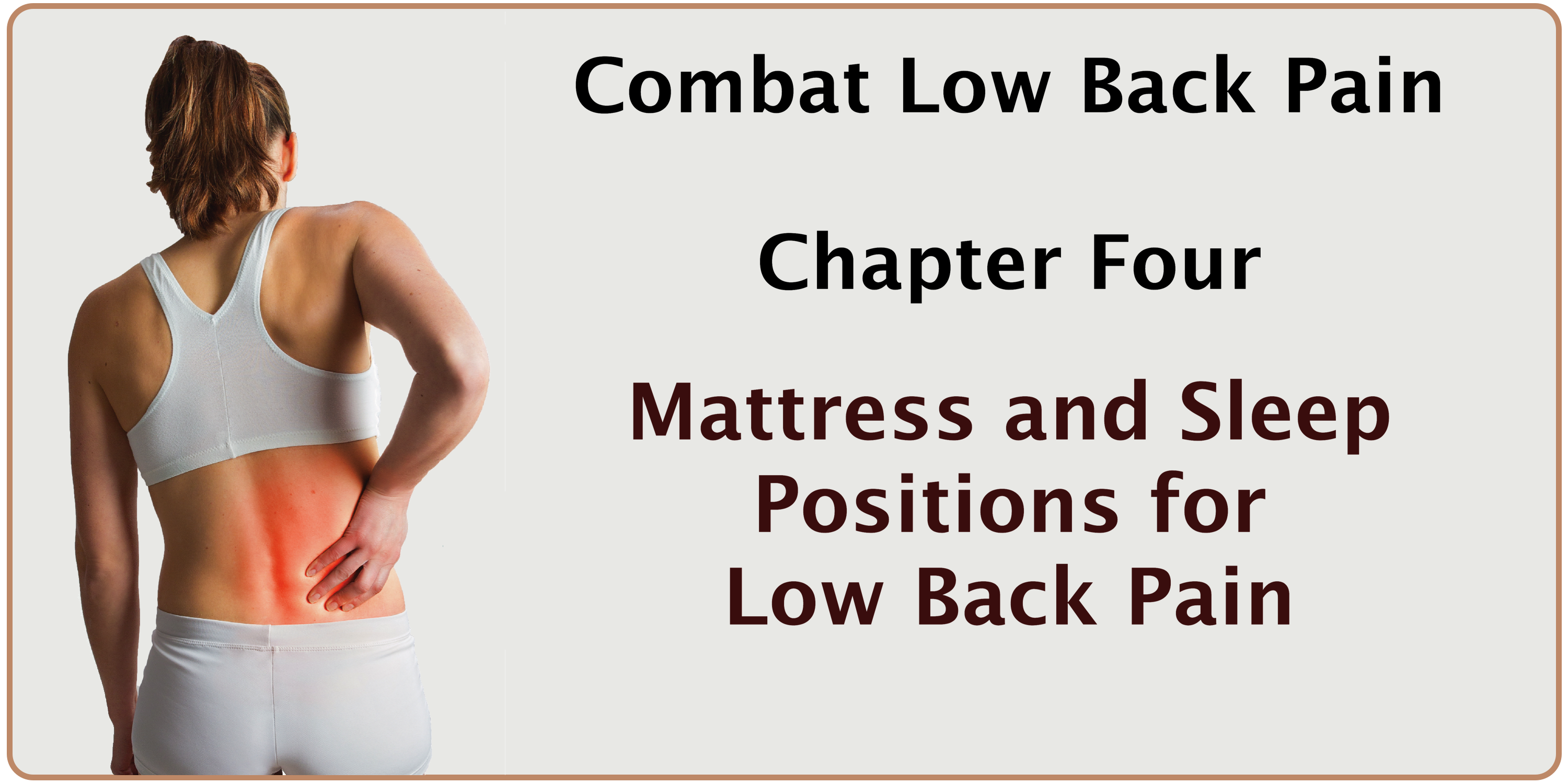 Want to see what else we would advise for you?
Why wait?

Find Out When We Are Open